May is one of our favorite months here in Korea. The spring flowers have gone, but the mountains are bright green against the clear blue skies. Everything feels new again and slowly but surely, every temple in the country starts hanging their seemingly endless supply of lanterns.

Korean temples are already brightly colored with their hand painted eaves. The canopies of lanterns filling the sky make them that much more vibrant. We have heard many people say, “Once you’ve seen one temple, you’ve seen them all.” For us, this simply isn’t true! Even if temples just aren’t your thing, at least check them out during May when there are activities offered such as lantern making and prayer bead crafts. Even the smaller temples welcome visitors with small tokens of appreciation. At this temple in Suncheon, we were given beaded bracelets, coffee, and quite a few offers of explanation about the history of the temple and the holiday. It’s a great way to learn a little bit about Korean culture, so don’t miss out. 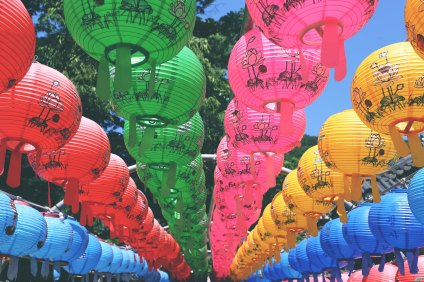 Buddhism has had a somewhat noticeable impact on the world. Let’s just say, a few people have heard about it. Korea, like most countries greatly influenced by Buddhism, celebrates the birth of Siddhārtha Gautama with a festive blend of reverence and festivities. Buddhism was first introduced to Korea in the year 347, and initially was widely accepted. After a while, however, Buddhism suffered from persecution for more than five hundred years. It wasn’t until Buddhist monks helped fight against the Japanese invasion in the 16th century, did the persecution stop. Buddhist monks do not marry or have any children so they were fierce fighters.

The whole country gets the day off for Buddha’s Birthday, as it is a national holiday, so there are numerous locations and opportunities for Korea to do what Korea loves: have more festivals. While most Korean festivals and packed with people and lacking any personal space that can be converted into enjoyment, the festivities in honor of the Buddha are generally more…(what’s the literary word?)…chill. If you have the opportunity of being in Seoul during this celebration, make sure to journey out and put yourself into the crowds and enjoy the parade. Hundreds of thousands of lanterns. Easily the happiest parade and audience I’ve ever witnessed- Seoul’s Lotus Lantern Festival is a fantastic festival.

One thought on “Buddha’s Birthday”