It’s that time of year again in South Korea: Jangma. The word “jangma” (or 장마) is the name of Korea’s annual rainy season. Monsoons and typhoons all bide their time, waiting for this time of year to roll around before their onslaught begins. Generally, jangma entails 3-5 weeks of sporadic downpours. At its worst it will dump on you for weeks.

At best, jangma means terribly high humidity and a couple short showers per week. The constant humidity and summer heat, though, makes for an interesting (albeit sometimes uncomfortable) season. 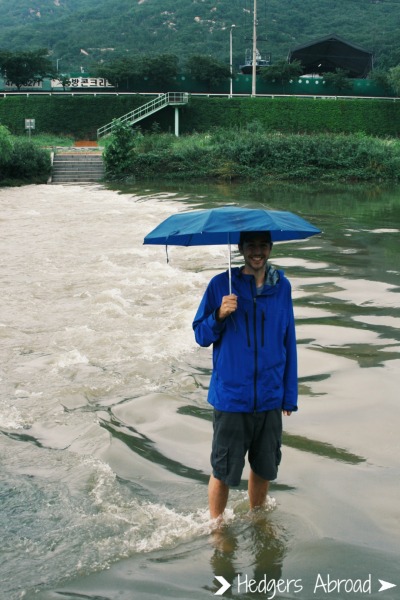 If you find yourself in Korea anywhere from mid-July to the end of August it is good to keep jangma in mind when packing. The heat requires visitors to dress light. We suggest highly breathable and moisture wicking clothes that will dry quickly if subjected to the precipitation. Shorts and short sleeves are a must. Don’t bother with pants unless you’re a glutton for sweaty discomfort and naps at hospitals. The humidity will kill you in pants. Somehow the Koreans manage to survive wearing pants, but most of our readers are not Korean. The natives have special genetics that we have discussed here.

Travelling in Korea’s monsoon season means that you will likely get wet. Take comfort in knowing that the human body is (minus the face holes) waterproof. Pick up an umbrella from any of the 1 billion convenience stores and proceed with your adventures. If getting slightly wet isn’t your prerogative, then keep indoor activities for backup plans and throw a poncho into your back pocket for a dollar.

As stated before, this season generally lasts for 3-5 weeks sometime in the months of July and August. This is not to say that Korea lacks rain in other parts of the year, but jangma has been fairly consistent for centuries. If you were to bet on rain and prepare for rain, this would be the time of year to go All In.

The parade of umbrellas at Stephanie’s school

Normally, jangma is just an few hours of rain a few days per week. Some weeks there is nothing but unbearable humidity; the rain is mysteriously missing. Our video makes it look pretty intense, but this year Korea got hit with a few typhoons during jangma, so it was worse than normal. The wind shown in our video is not a common occurrence during this season. Don’t let the dramatic scenes in our video dissuade anyone from coming to Korea. Even in this time of year, this country is beautiful.

Some kids playing in the flooded river

If you have any questions about Korean weather, let us know in the comments section below.